If you have had an injury to the knee and it is now feeling unstable or giving way you may have torn a ligament which we call an ACL rupture. Maybe your doctor has already diagnosed you, or you know a friend or relative who has suffered from the same thing. If this is the case it might be best to have an ACL reconstruction.

What does ACL reconstruction cost?

If you want your surgery done privately it will almost always be fully covered if you are insured. If you want to be seen self-funded the hospitals which Mr Willis-Owen uses provide very competitive fixed price packages which include the surgery and the follow-up appointment. 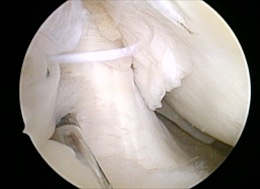 The ACL is a strong ligament that runs diagonally through the middle of your knee. It stabilises the knee and stops it giving way, especially when you twist or pivot. As well as its mechanical role, it serves as a very important sensor to contribute to balance and joint position sense (proprioception).

The picture above shows a normal ACL

The ACL is one of the most commonly injured ligaments. It’s usually torn when you slow down very quickly while turning or sidestepping at the same time. You’re more likely to injure your ACL if you play certain sports, particularly football, netball, or skiing, but many people rupture their cruciate ligaments in other ways. 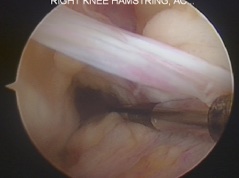 ACL reconstruction involves replacing your torn ligament with a graft. The graft is usually taken from a tendon in another part of your knee, Mr Willis-Owen usually uses the Hamstring’s tendons on the inside of the knee, but sometimes uses part of the patellar tendon, or can use allograft or synthetic ligaments. 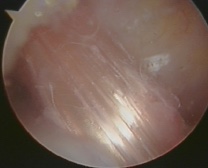 The new ACL that Mr Willis-Owen has made out of the hamstring tendons.

ACL reconstruction is carried out stop the knee giving way. This means that you should be able to return to playing sport, but that will depend on whether there are other problems with your knee such as torn cartilages, other ligament injuries or arthritis. Scientific studies show that only about 47% of patients choose to return to sport after their ligament surgery.

Some people with an ACL tear may not need an operation to repair it. You may be offered physiotherapy, exercises and a hinged knee brace to give your knee support. This can be just fine if:

However, if your knee is giving way when you do the activities that you want to do, be it day to day life, work, or sport then it is likely that you need a reconstruction. Some surgeons will say that an ACL reconstruction protects the knee against arthritis in later life. This has not been conclusively proven! It’s likely that from the moment your knee was injured you are at a higher risk for arthritis.

It is best to have an ACL reconstruction between three and eight weeks after your injury. This allows any swelling to go down. Mr Willis-Owen may ask you to have physiotherapy during the weeks after your injury for “prehabilitation”. This is to make sure you can move your knee as fully as possible before your operation, to teach you the exercises you will need after the surgery and to get the knee in best possible shape to have the surgery.

If you smoke, you really should try to stop, as smoking increases your risk of getting a chest and wound infection, which can slow your recovery. Smokes get a worse outcome and a higher failure rate.

Mr Willis-Owen will discuss with you what will happen before, during and after your procedure, and any pain you might have. This is your opportunity to understand what will happen, and you can help yourself by preparing questions to ask about the risks, benefits and any alternatives to the procedure. This will help you to be informed, so you can give your consent for the procedure to go ahead, which you will be asked to do by signing a consent form.

What happens during an anterior cruciate ligament reconstruction

Once you are asleep Mr Willis-Owen will examine your knee to check how badly your ligament is torn and whether any other tendons or ligaments have been damaged.Then he will remove the piece of tendon that will be used as the graft from your hamstrings at the back of the knee on the inside. This is pretty sore afterwards and feels like a badly pulled hamstring. Within 6 weeks of the surgery, the body recovers and regenerates a new cord where the tendon used to be.

Mr Willis-Owen will then make a number of small cuts in the skin over your knee that is being treated. He will insert an arthroscope and other surgical instruments into your knee through these cuts. He will fully examine the inside if the knee and deal with any other problems in the knee at this stage. Torn cartilages will be trimmed or repaired. Damage to the articular surface will be treated too. It is often these factors that determine what restrictions you have to follow after the surgery, and how good the end result is.

Mr Willis-Owen will drill a tunnel through your upper shin bone and lower thigh bone. He will put the graft into the tunnel, attach it to the bones and fix it in place, usually with screws. These are normally left inside your knee permanently. He will close the cuts with dissolving stitches which just need trimming at 2 weeks. Waterproof adhesive dressings are applied and a large bandage is wrapped around the leg to control the swelling.

The operation usually lasts about an hour or so.

What to expect afterwards

You will need to rest until the effects of the anaesthetic have passed and will need pain relief to help with any discomfort as the anaesthetic wears off. It is best to keep your leg elevated as much as possible.

General anaesthesia temporarily affects your co-ordination and reasoning skills, so you must not drive, drink alcohol, operate machinery or sign legal documents for 24 hours afterwards. If you’re in any doubt about driving, contact your motor insurer so that you’re aware of their recommendations, and always follow your surgeon’s advice.

You will be encouraged to get up, put weight through your knee and move it as soon as you’re able to after your surgery. You will need to arrange for someone to drive you home. You should try to have a friend or relative stay with you for the first 24 hours after your operation. Many people go home on the same day as their operation if fit to do so.

Your nurse will give you some advice about caring for your healing wounds before you go home. You may be given a date for a follow-up appointment. The large bandage can be removed at 48 hours. The waterproof adhesive dressing will be bloodstained and appear dirty. These have been put on in a sterile environment so they should be left alone for 2 weeks, not changed.

You will be given painkillers to take home, Ice packs and elevation are also helpful in the first few days.

It usually takes about a year to make a full recovery from ACL reconstruction but this varies between individuals, so it’s important to follow your surgeon’s advice. If you have a desk job, you may be able to go back to work three to four weeks after your operation. It may take up to six months if you have an active job, and nine months to a year to return to professional level sport safely.

What are the risks?

As with every procedure, there are some risks associated with ACL reconstruction. Fortunately, these are rare: